Having had a dry early start to the year, as these things happen it turned wet as silage time approached. So 10-12 days later than it should have been grass bulked up a bit more with more stalk & fibre to it - but it filled the clamp with 100 big bales as well. We rely on contractors to do this & they are always very obliging the grass into the clamp going through a Forage wagon. The chop length is greater than a precision chop machine but it does not seem to be an issue feeding it to the sheep. Anything not suitable for the sheep goes to our herd of Pedigree Dexter cattle which with followers usually numbers between 40 &50. The beef from the herd is either sold as freezer packs or to Swaledale Foods at Skipton who are supplying top class restaurants in London. 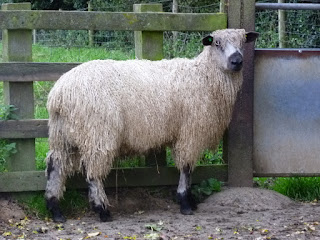 Funny looking Charollais you say - but having mentioned the Dexters I thought I would introduce you to our other breed of sheep which son Stephen describes as Dad`s pets  - these are our small flock of pedigree Teeswaters numbering 20 ewes which we have run for quite some years now. The Teeswater is the sire of the masham halfbred ewe - an extremely hard wearing commercial ewe - quite prolific & good milkers producing lambs with excellent loins. The Masham incidentally crosses very well with the Charollais for butchers lamb production. One other item worthy of mention is that the Teeswater has what is known as a lustre wool which is highly sought after for spinning.
We lamb our Teeswaters in March/April & the ram lamb pictured was the last of nine ram lambs to be sold in 2017
Harvest started well & just when we thought it was all going to be quickly wrapped up it rained again, so the last of our straw wasn`t baled until the end of October. Maybe it generates patience! 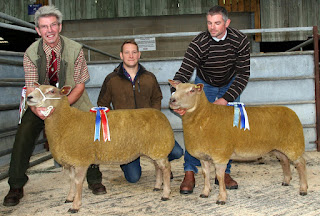 Our 2016 success at Skipton female sale was repeated this year when Ben James of Tenbury Wells Worcs. tapped out the 1st prize ewe lamb as Champion & the 1st prize shearling ewe ( a Foulrice Majestic daughter ) as reserve.He subsequently backed his judgement by taking the champion at 700gns & also the 2nd prize ewe lamb (a Foulrice Osprey daughter) at 800gns.He also bought the reserve champion by commission for 1200gns which was the top price for the sale.
Rounding the year off we were once again honoured to be awarded in the flock competition,Champion Flock of the Northern Region for the second year running.
Posted by Charles Marwood at 23:02 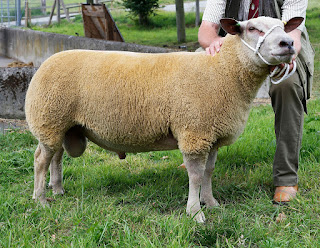 Another Mount Aloe son out of a Langstone K2 daughter  full of flesh with a big gigot  -  buyers were R Swift & Sons of Church Eaton in Staffordshire. If you think the ram is sulking that's because he was not halter trained & didn`t appreciate the opportunity of a photo call.
Fast forward to Builth Early Ram Sale 2017 & there we were again this time winning the pen prize for the large pens of shearling rams with our 20 rams 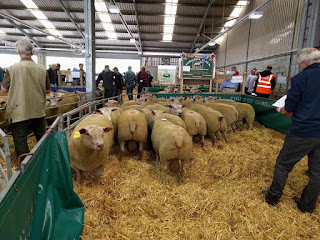 Always a good venue for good commercial rams. A Foulrice Osprey grandson won 1st prize performance recorded shearling ram, was reserve Champion & sold for the joint top price of 980gns to one of our regular customers  - Reg Brookes & Son of Worcs. The tags round some of the rams necks are easy identifiers for rams in the top 10% (gold) & those in the top 25% (silver)
Mount Aloe did it again at the Skipton Charollais Sale  - producing the 1st prize ram lamb which was subsequently made Champion under the watchful eye of judge Mr Harold Keast 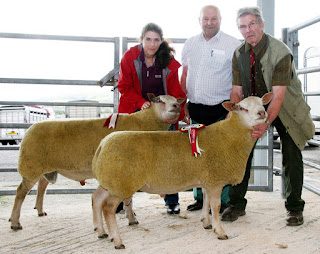 Pictured with the Judge &  daughter Deborah & her 1st prize shearling ram which was reserve champion
Posted by Charles Marwood at 22:11

Time for some catch up as much has happened since my last post of early September 2016.
Our September ram sale at Skipton with CCM Auctions & auctioneer Ted Ogden was successful, as you see from the picture below, we took Champion with a twin born shearling ram by our prolific stock ram Dalby Mount Aloe.This sold to Mr Jim Kelly of Market Harborough Leics. 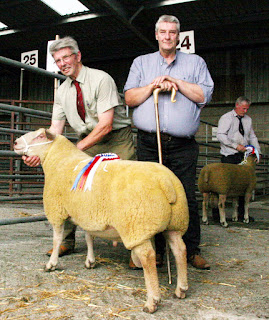 Champion ram pictured with judge Mr James Huddlestone of Arkholme nr. Lancaster.
Incidentally we sold another son of Dalby Mount Aloe 14DG04690 in 2015 to the National RamCompare project where he has been used in the commercial flock of Duncan Nelless of Thistleyhaugh Northumberland very successfully; & in the preliminary results announced in November 2017 this ram is the highest placed natural service Charollais ram for overall carcase merit.He also produced one of the largest progeny groups for the trial. This follows on from his sire who as a shearling with natural service comfortably served 100 ewes in a three week cycle.
Our top priced Ram lamb Foulrice Rachamin 16DG06107 sold earlier this year to J & J Corbett, in the September 2017 analysis with Signet Breeding is the third highest rated stock ram currently in the Charollais breed with an index of 459 showing exceptional growth & muscle together with a slightly positive fat rating - best for finishing lambs off grass.
Next up came the autumn in-lamb female sale at Skipton & under the eye of judge Dave Roberts of Kenley in Shropshire, Foulrice gimmers took both Champion & reserve. The Champion was  purchased by the judge for 800gns carrying twins to Foulrice Osprey.She was surpassed in the sale ring by the reserve Champion which was bought by Edward McCann of Askham-in-Furness, Cumbria for 1100gns, this time carrying twins to our July purchase Bronwydd Ready To Rumble. 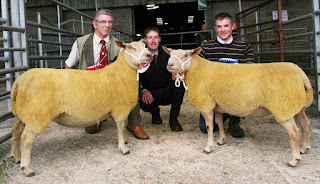 Our successful year was rounded off by not only being awarded Champion flock for Yorkshire & Cleveland area, but also becoming Champion Flock for the Northern Region of the BCSS
Posted by Charles Marwood at 15:04

Right to the last ram lamb of the sale there were a good number of buyers in the ring, so when Foulrice Roderick  came into the ring he quickly found a new home at 1350gns with Gerald Burroughs for his Sheldon flock
Posted by Charles Marwood at 22:58

Worcester Premier sale arrived with haste as it always seems to do, though we were probably a bit better prepared than sometimes, with the weather being a little kinder.Having a number of good ram lambs we ventured to enter two runs of five ram lambs which meant that the second run would be at the end of the sale & as it turned out they were the last ram lambs sold.
However even though we did not catch the judges eye there was plenty of buyer interest both on the Friday at judging & on the sale day itself.
A strong hard fleshed shearling son of Rhaeadr Nock, with an index of 338, set the pace at 1650gns selling to Mr Griffiths of Llanbydder.He was followed by our last shearling ram a March born son of Foulrice Osprey ( Charollais male champion Gt. Yorks Show 2016 ) with exceptional muscling,& an index of 362 selling at 2000gns to Brian Cornish of Devon.
Fast forward to the end of the sale & Lot 225 Foulrice Regis a very tight skinned well balanced son of Foulrice Osprey came into the ring & after strong competition was knocked down to Charles Sercombe for his Dalby flock﻿﻿
.
Posted by Charles Marwood at 22:02 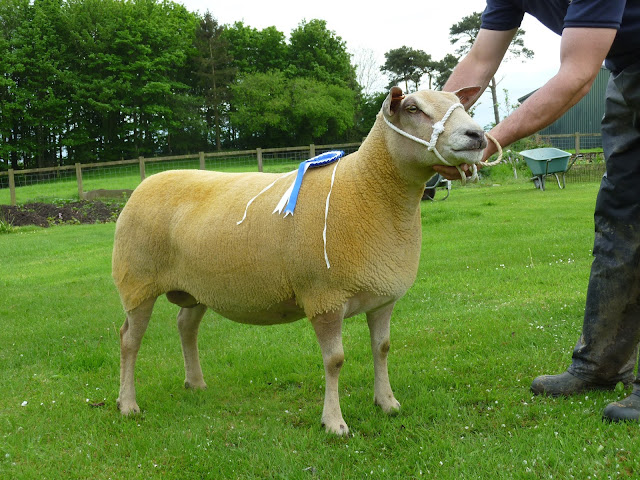 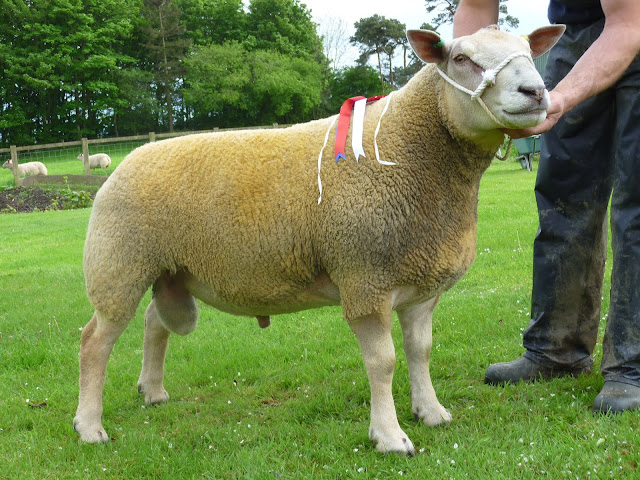