For those of you who have waited patiently for this site to come out of hibernation here we are 20th february 2014 & finally made it. Since my last post obviously lots has happened some good & some not so good. Our shearling ewe 11DG01238 was res.Ch. female at the Great Yorkshire Show 2012 & went on to win three further breed champions at Driffield,Ryedale & Kilnsey. We also won the Charollais Ripley trophy for group of three at the G.Y.S.
Added to this we won the Yorkshire & Cleveland area flock competition for 2012 & went on to win the North of England Regional flock competition, with our home bred stock ram Foulrice Lightening 11DG01588 (sired by Castellau Krypton as is our show gimmer) being Champion stock ram.
Our notable purchase of the year was Dalby Mount Aloe 12PE01524 at 2000gns from Charles & Helen Sercombe at Worcs Premier sale - a very correct well fleshed ram with figures to match,& contrary to some previous experience his index has risen with use, & now stands at 447, putting him as the seventh top recorded stock sire.The reason for noting this is that he is producing the progeny to match - see below.
For us the summer of 2012 was one of the wettest in recent years which washed everything out & resulted in some of the poorest silage made for years - copious quantity but abysmal quality (still had 50 bales left for this winter 2013/2014 which our cattle are very reluctantly eating). The year finished off with a good dose of SBV which took 25% of our lamb crop after a moderate scan as well.
However as they say every cloud has a silver lining with some of the evidence pictured below. 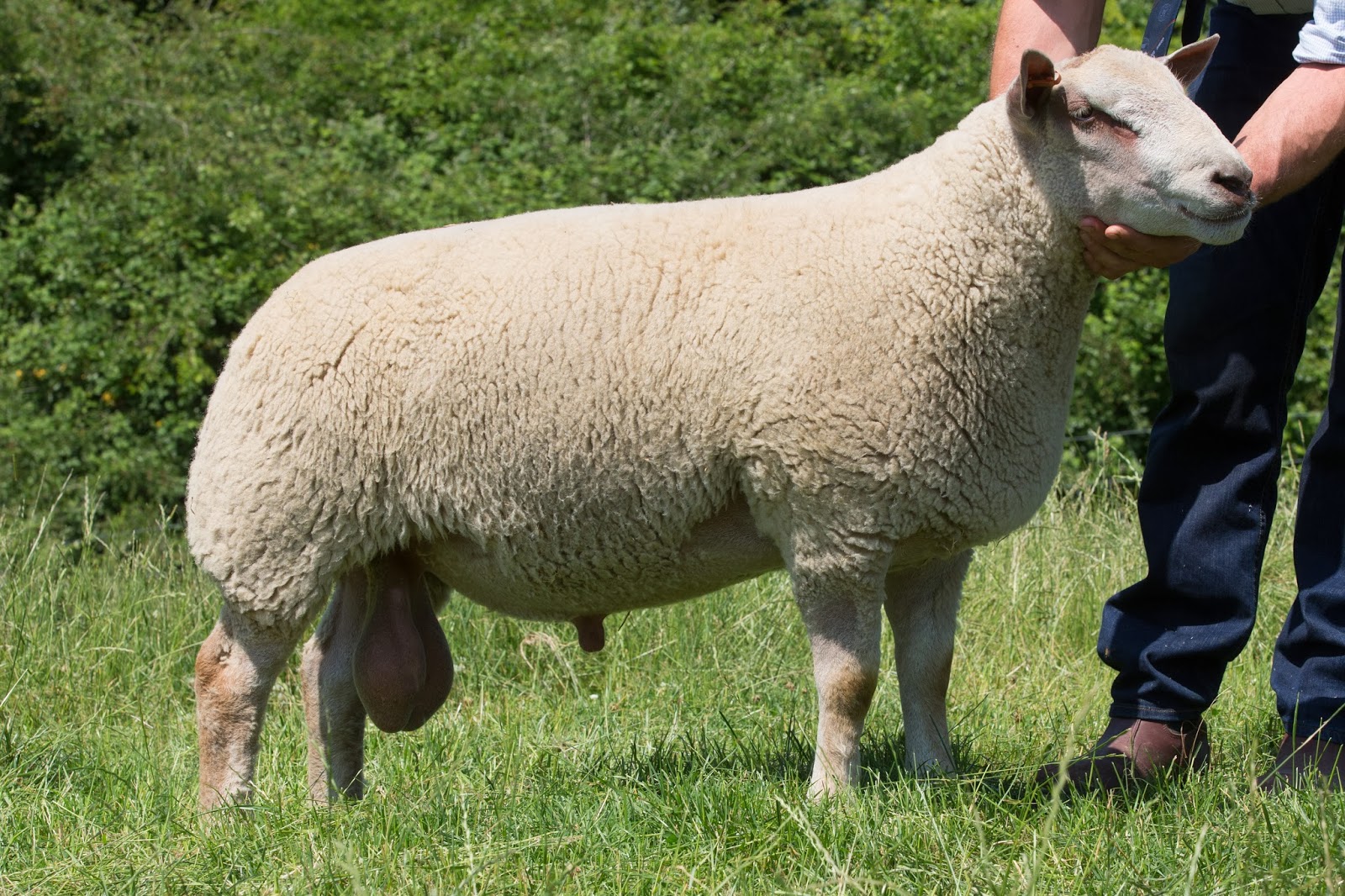 Nuria one of the best tup lambs that we have bred for some years caught the eye of Eddie Buckley & others at Worcs. Premier sale 2013 subsequently selling at 5200gns making him top priced ram lamb at the sale. In total three Dalby Mount Aloe sons averaged 3000gns - the other two selling to Arwel Owen for the Banwy flock & to Jamie Wilde for the Redhill flock. Also a strong Foulrice Lightening son sold to Messrs Meyrick for the Bould flock in the Cotswolds. ﻿ 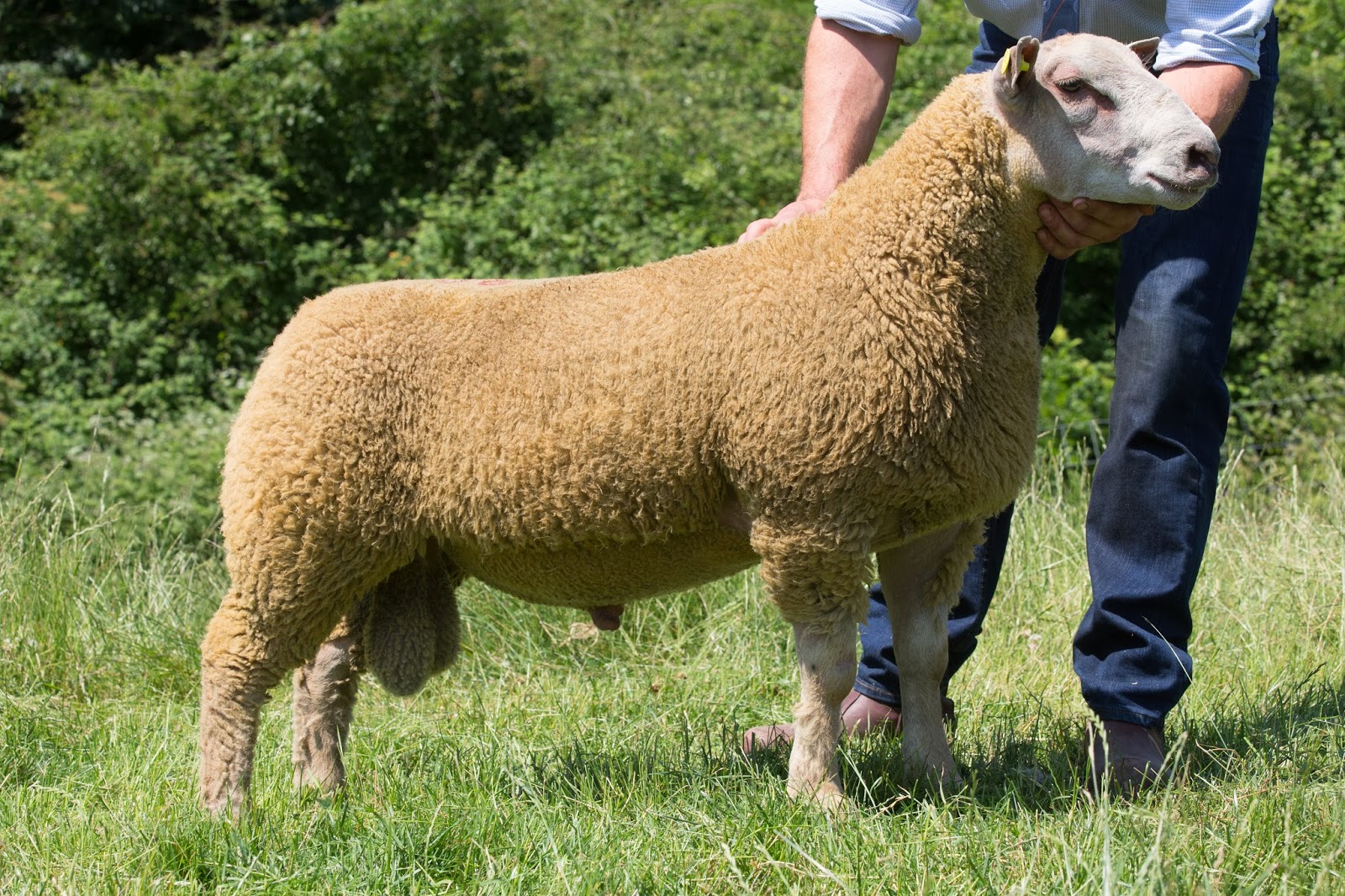 Rhaeadr Nock 13XXK00879
﻿
Rhaeadr Nock was the pick of Myrfa Evans pen at Worcs. Premier 2013 & this run of ram lambs came into the ring before our run so we finished up investing 4000gns in Nock before ours came into the ring, which also turned out to be the second top price of the sale. He has produced some good lambs so look out for them this season. His fleece has been removed & he continues to impress!
We also took a fancy to Neil Oughton`s ram lamb Lowerye Neil`s Favourite 13ZVY00661 for his tremendous fleshing,& though our lambs from him will be March born we feel that he will make a positive contribution to the Foulrice flock as with his fleece removed he is not dissimilar to Ash Charollais Filibuster. Look out for his progeny as well!
Our 2013 show season was reasonably successful with our now 2shear ewe 11DG01238 taking Champion & Interbreed Champion at Driffield show for the second year running & repeating this success at Ryedale show. At Kilnsey show she had to make do with res. ch. as Champion went to her half brother Foulrice Lightening 11DG01588 who went on to win res.interbreed champion.
Now we need to get busy with the camera & produce some more pictures to bring you all up to date. It`s mid February & everything is, in spite of being wet, very green I guess that there`s time for some hard weather yet !!

Posted by Charles Marwood at 22:33