In spite of show successes there was much trepidation in the marketplace as butcher`s lambs had been a much poorer price than the previous year. So with a mixture of hope and misgivings we set off to our first major commercial ram sale of the season - the NSA Borders & Wales Ram Sale at Builth Wells - along with daughter Deborah and a consignment of shearling rams from both our flocks. Much to everyone`s surprise there was strong demand for all breeds particularly Charollais with good numbers of buyers present.

The second ram in 14DG04651 (twin brother to our first prize Yorkshire Show winning shearling) won the performance recorded class selling for 1120gns. But our sale topper was our third ram in 14DG04842 (a March born son of Rhaeadr Nock) selling at 1300gns to D & A Fenwick Ltd of Gainsborough Lincolnshire.

There was a distinct variation in ram sales throughout the season, but all the shearling rams found new homes with demand for Charollais remaining strong to the end of the season for ram lambs.

The summer though not that hot provided an abundant supply of grass and our silage was much better quality than the previous year with dry matter of 31.5%, D value of 75.8 & ME of 12.1, better than the second cut haylage this year but even that is feeding nicely.
The grass supply meant that we had pastures at the right stage for flushing the ewes well both for July A.I. and October natural tupping.
.
Posted by Charles Marwood at 18:01

Having been awarded the Charollais championship on the Tuesday, on the following day Nock progressed to win the Grafton Terminal Sire trophy and followed it up by being awarded Supreme Sheep Champion of the show. This success he repeated at both Driffield and Ryedale shows, finishing his season in style by winning the Interbreed trophy at Kilnsey Show for the second year running.

Posted by Charles Marwood at 16:33

Having brought you up to date with 2014 we now move on to spring of 2015. The bulk of the silage made last summer fed as expected with feed value deficiencies having to be compensated by increased levels of concentrate feeding for the ewes to milk well. Even then it is not fully possible to compensate for forage inadequacies with increased concentrates. We saved the better quality second cut silage to feed to the ewe lambs which were lambing to avoid prolapse problems.

We have in fact fed home mixed rations for thirty years now as you have much more quality control. With the pedigree flock numbers stable for a number of years at 500 there is no room for extravagant feed as our flock is run very much on a commercial basis, for even though we sell a number of rams each year for pedigree use, the bulk of our rams produced go onto commercial farms.

The Foulrice flock has been performance recorded since its formation 34 years ago and has seen steady progress till in 2015 our average index has passed the 300 mark.
Our aim has always been threefold :-
1/ To have a flock of consistent type which maintains the easy lambing attributes of the Charollais.
2/ To produce rams with good skins, good shape & hardy type - pleasing to our customers.
3/ To see continual improvement in growth & carcase traits through recording.

Early in the year the Signet RamCompare Project was announced. It is a two year pilot project designed to trial strategies for capturing commercial data on slaughter lambs in the UK sheep industry. It will be similar to central progeny tests that are taking place in Australia, New Zealand and Ireland.
So when the invitation was given for offers of high index Charollais shearling rams for the project we put some forward and had two accepted - both in the top 1% of the breed, and both March born on a grass based system. One sired by Lowerye Neils Favourite, and the other by Dalby Mount Aloe.

One of our best lambs in our December born batch was a Lowerye Neils Favourite son - Foulrice Pathfinder 15DG05165 who having an actual muscle depth of 37.9mm came in with a muscle EBV of 6 (the highest of the year) as part of an overall index of 414. Needless to say he was quickly sold to a private purchaser for a reasonable sum.

Posted by Charles Marwood at 19:06

Before we launch into the happenings of 2015 lets just have a quick recap of the events of 2014.
Spring lamb trade was good for those that weren`t needed as flock replacements or to sell as ram lambs; whereas cull ewes took a step back. Nevertheless going back to the maxim that we adopted when first breeding Charollais  -  If you produce a quality product it will always have a market  - we are always able to sell at the better end of the market.
Forage was again an issue and after missing our early slot of weather for silage making by two weeks due to the rain we finished up filling the clamp plus a large number of big bales, all very dry and smelling good, sadly lacking in feed value. This was helped to some extent by the fact that we made a smaller number of second cut haylage bales of first rate quality later in the season. 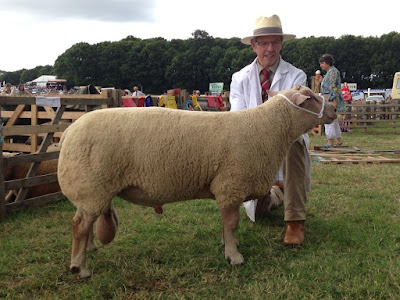