Worcester Premier Sale 2006
Already into the 2006 sale season, Worcester Premier Sale brought success for progeny of our 2005 Premier purchase Ash Charollais Filibuster. This gold award ram purchased for 2100gns in his first season produced progeny which won the Progeny Cup Award.
This group was led by Foulrice Gladiator DG 6050, which gained the most points in the breed evaluation with a total of 247, bringing him Gold Award and Champion Ram Lamb. In this he had the highest loin score at 38 and was one of only two ram lambs with a gigot score of 50 and above.He subsequently sold to W & C Ingram and C & D Timm for the top ram lamb price of 5600gns. 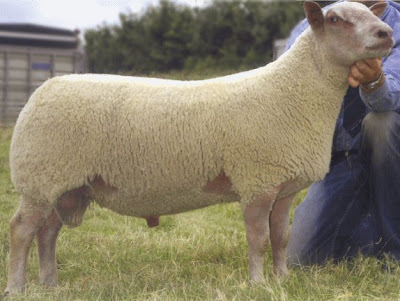 Foulrice Gladiator, DG 6050 Champion Ram Lamb Worcester 2006
Our second Gold Award Filibuster son DG 6405 Foulrice Gervase was knocked down at 1100gns to Harold Keast, South West region chairman (Foulrice Gervase was resold in October at Harold Keast's dispersal sale for 1300Gns to John & Sue O'Reilly), whilst a third Filibuster son, with an index in the top 25% was taken by R & M Tulloch and Charles Sercombe at 16000gns.
A well grown Jubilee son out of one of our oldest flock ewes, a Foulrice Rival daughter, made 900gns to Mary Madders and Stuart Johnson (Stuart informs us that this Ram has never stopped growing), giving us an average of £2415 for 4 lambs sold.
Our shearling trade was also very buoyant, being led by Foulrice Falcon, an Urley Nook Endeavour son was sold at 3000gns to James Clanachan, Dumfries. (Urley Nook Endeavour was 2005 National Male Champion of Champions). Falcon has been used as a lamb and produced some very fleshy March born lambs and subsequently has won the stock ram section in the south of Scotland flock competition in Autumn 2006. 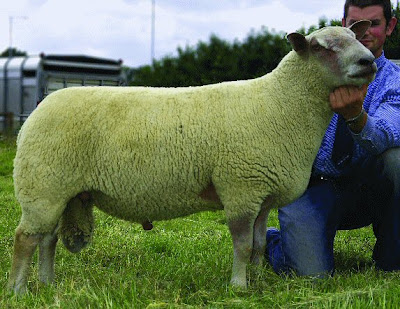